International Conferences on Representations of Algebras 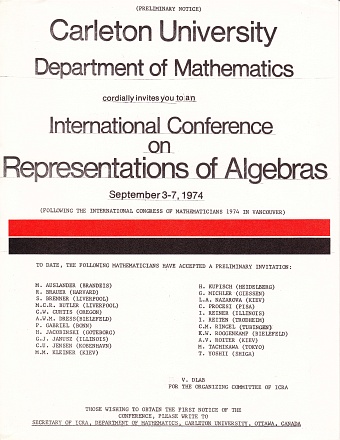 The series of ICRA conferences was established by V. Dlab in 1974. The purpose of these meetings is to exchange the latest results in an exciting research area. From the outset it has been a major focus to bring together leading and well established experts with young researchers who are just starting out and profit greatly from the possibilities of exchange and contact provided and from workshops where recent advances are presented with detailed exposition. There is usually a workshop organized as well as the conference itself.

The image on the left depicts the poster for the 1974 ICRA at Carleton University in Ottawa (click on the image to enlarge it).

At the meeting in Patzcuaro (Mexico), 17 August 2004, the Scientific Advisory Committee of the ICRA decided to establish the “International Conferences on Representations of Algebras (ICRA) Award”. The ICRA Award is awarded at each session of ICRA for outstanding work by young mathematicians in the field of Representations of Finite Dimensional Algebras. Motivation to create the award builds on the following aims:

The award consists of a certificate containing a citation. The award is announced at the Opening Ceremony of each session of ICRA and awarded at the banquet of the Conference. If present, the recipient is expected to give a plenary talk. Award and citation will be published in the Proceedings of ICRA and widely communicated, for example, to the Notices of the AMS and the Newsletter of the London Mathematical Society.

Eligibility: Any young mathematician, not older than 35 years of age (except to allow for a broken career), is eligible for nomination.